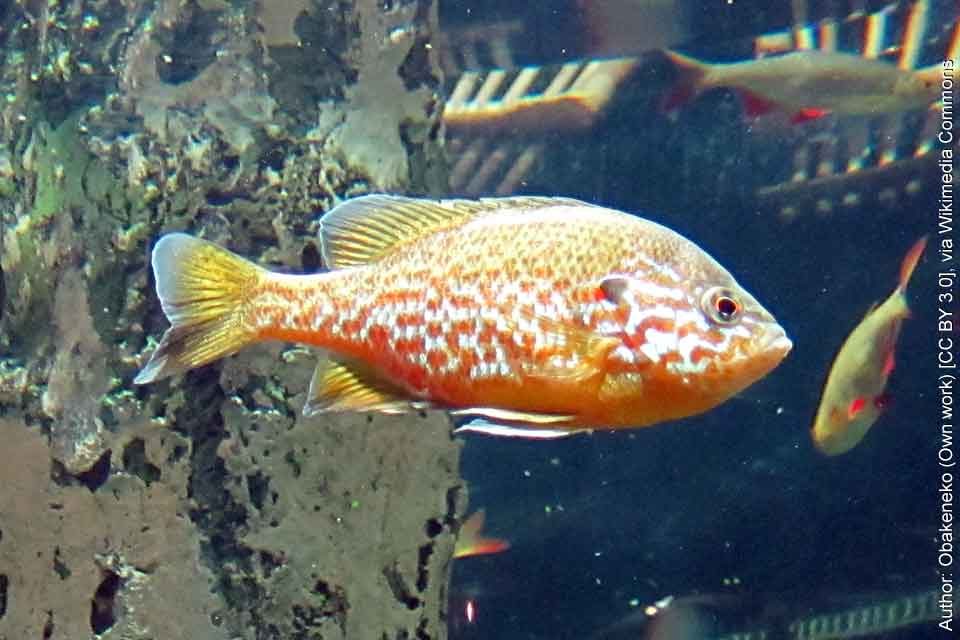 Pumpkinseed sunfish are very pretty fish, with blue, green, orange and gold colors. Their sides are striped and they have a black opercular flap with a bright orange or red spot behind it. Their body shape resembles that of a pumpkin seed, especially when their chest and belly turn to a vivid yellow-orange during the pairing season. They have 10-11 sharp spines along their dorsal fin and three more along their anal fin. These pointed spines help to protect themselves against bigger predatory fish.
Pumpkinseeds are a member of the sunfish family (Centrarchidae). In nature, they can grow to a size of up to 16 in (40 cm). In a pond, however, they usually only reach (10 – 15 cm).

Pumpkinseed sunfish have a stoop which is more prominent as they age. Hence their scientific name “Lepomis gibbosus“. “Gibbosus“ translates as humped, while “Lepomis“ derives from the Greek words for „scale“ and „cover“. Their hump gives them a somewhat sticky appearance.
They are active during the daytime, often swimming around in small schools of 2 to 4 animals. At night they tend to rest between plants, rocks or at the bottom of the pond.

Pumpkinseed’s original distribution ranges from southern Canada down along the east coast of the United States. As of today, it’s common in most northeastern states of the US. You won’t find it further south, as it needs water temperatures below 73 °F (23 °C).
The pumpkinseed sunfish has been introduced to Europe in 1877, and can now be found in central Europe as well as most of the Mediterranean countries. In Europe, it’s considered an invasive species which competes with native fish for food.

Pumpkinseeds are rather easy to take care of in a garden pond. However, they are very territorial and you will need a pond of at least 400 gals (1500 Liter). They also definitely need clear water and will suffer when there’s too much silt on the ground. So a good filtration system or a bottom drainer are vital.
Like most sunfish, they prefer well-oxygenated water but can cope better at lower oxygen levels than e.g. bluegills.

Furthermore, they are accustomed to cooler climates. So while they are hardy, they won’t survive in water with temperatures higher than 68 – 73 °F (20 – 23 °C). During a hot summer, a pond fountain can help in cooling your water down. Especially if you switch it on at night or in the early morning hours when the surrounding air is cooler.

In winter the pumpkinseed stays in deeper areas of the pond, so make sure the deep area is big enough for all your fish. Also, some plants and rocks in these deeper regions will provide shelter and allow them to hide and feel safe and comfortable.

How to feed Pumpkinseed Sunfish

Pumpkinseeds are hunting for food at daylight and are most active during the afternoon. They feed on insects, mosquito larvae, small crayfish, mollusks, and worms. They also eat other fish’s eggs and fry, thus keeping overpopulation at bay. Every now and then, they may also nibble at your underwater plants. This usually isn’t much of a problem, as they do prefer foods of animal origin.

In a pond, you can feed them small worms and larvae, alive or frozen. They can get accustomed to flaked fish food as well. They also accept pellet food, but as they have small mouths, you should only use small pellets. 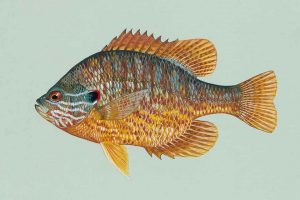 The mating season usually is from May up until June, when water temperatures have risen to around 60 °F (16 °C). During this time the male pumpkinseeds will turn more colorful with colors on their back ranging from golden green to brown and orange. Their bellies are often bright orange. Females become more colorful as well, but not as much as the males.
Male pumpkinseeds will then start building a nest in the sand in shallow waters. So your pond should have an area which is between 6 and 20 inches deep (15 – 50 cm), has a sandy bed, some plants, and preferably full or partial sunlight.

The males build their nest by sweeping out oval, shallow nests in the sand with their fins. They then remove any small rocks, twigs or other objects by picking them up with their mouth and carrying them away.
Once the nests are complete, the female pumpkinseeds will come by and release their eggs, which stick to the stand. The males then release their sperm to fertilize the eggs. One single female can produce 1,000 eggs, or more when they are bigger and more mature (some sources even state up to 5,000 eggs). Often they release them over a couple of nests, not just one. Vice versa the males will fertilize eggs of different females.
After spawning the females often leave again, while the male pumpkinseed stays at his nest and watches over his fry. The eggs hatch after a couple of days, usually between two and seven days.

The young fish stay near their nest and the father watches them for the first 11 days. When they stray from the breeding area, the father will catch the babies with his mouth and return them to the nest. During this period the male pumpkinseed are very protective and aggressive and will attack any intruder (see video #2) to defend their offspring. So it’s best not to disturb them. You can have fun watching them of course and try to feed a little, but better leave any pond care for later.

During the first year, the youngsters will grow to about 2 in (5 cm). After two years they are fully grown and are able to reproduce.
One thing you have to watch out for is overpopulating your pond. One way to avoid this is to keep pumpkinseed together with another species which will deplete their eggs and fry. While this may sound cruel, it’s only natural. In fact in waterbodies without predators, the pumpkinseed will spawn quickly. This puts them under stress, as the competition over space and food intensifies. The end result is that the individual fish doesn’t grow to its full size, but stays a lot smaller.
This phenomenon of stunting is common for a number of fish species. Interestingly, once you put them into an environment which is better suited, they can still grow to their normal size.

Sea Grant Institute at the University of Wisconsin 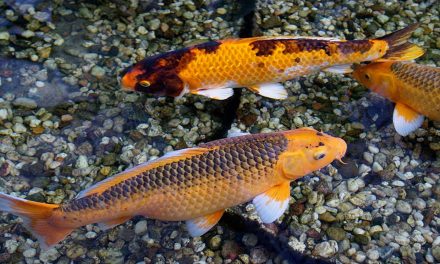 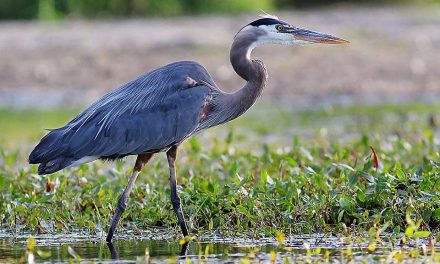